Blog - Latest News
You are here: Home / HOME / Blog Subjects / Inspiration / How travelling & workawaying taught me to be happy living with le...

I remember the feelings so well. Late nights tossing and turning, physically exhausted but unable to turn off the merry-go round of thoughts. “What am I doing?” “What’s next?” “What’s the point of all of this?”

I was in my mid twenties, living in a hip part of the city in a comfortable, one bedroom apartment with a backyard and a front porch. I had a respectable job – one that paid well and helped others. I was right on track, doing everything I was supposed to be doing. Yet, I had a growing sense of emptiness, an unshakable anxiety that told me there was more to life than this.

“It’s been several years since I made the decision to rediscover myself by getting lost in the world.”

Maybe, I started to wonder, it began by living with less.

I confided my doubts and my longings to a close friend. “I feel like there’s this mismatch,” I told her. “Like my values and my lifestyle don’t add up. There’s this restlessness I can’t put my finger on,” I admitted.

“You’ve been this way since I’ve known you,” she said candidly. “Have you thought about taking something for it? It might help,” she added. 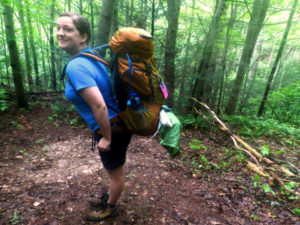 “After careful planning and two years of saving my money, I decided to quit my job in hopes that travelling would take me on a journey back to myself.”

I considered all of the things I had already tried, reliving their temporary relief. I’d filled my shopping cart with shiny objects for my home only to return to that empty feeling as soon as I walked through the parking lot back to my car. I had medicated with take-out food and television, with achieving the next promotion at work, with alcohol and friends. I’d evaded the tension in my gut with short-lived concerts, listening to my favorite musicians, or taking weekend vacations, only to eventually return to the gnawing feeling of isolation…

I didn’t really know what I was craving, but I knew I had to find out. My life was on a trajectory I couldn’t continue and I needed a reboot.

For as long as I could remember, travelling had always felt like taking a huge breath of air after living underwater. When I traveled, I felt most like myself, or the version I wanted to become in my everyday life. Catching these glimpses was like chasing the wind, I could feel brief moments of passion, aliveness, and creativity passing through me, but I didn’t know where they came from or where they went.

After careful planning and two years of saving my money, I decided to quit my job in hopes that travelling would take me on a journey back to myself. I moved out of my cozy apartment and  bought a 60 L backpack, filled  only with the essentials- clothes for warm and cold weather, a few books for company, and a journal. (As you can see from one of the pictures, it took me awhile and many aching muscles before I figured out how to wear it properly). By my sister’s recommendation, I signed up for Workaway and decided to let the hosts I stayed with determine my route. 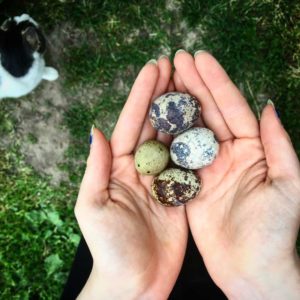 “I spent the next fourteen months living with less but thriving on the generosity and kindness I experienced from workaway hosts.”

I spent the next fourteen months living with less but thriving on the generosity and kindness I experienced from Workaway hosts in France and Ghana. I met volunteers from all over the world who felt a similar disconnect and were on their own path to rediscovering the essential parts of themselves. Their stories helped me make sense of my own.

Together, we cooked sumptuous meals and washed dishes. We spoke of the commonalities between us in accents ranging from German to Australian, British, French, Portuguese, and more. We wrote lesson plans and walked long dusty roads to the market, searching for the perfect pineapple or ripe mango to share. Spending time outdoors in backyard gardens, we pulled out weeds with our hands in the early morning sunlight and brisk autumn air of the countryside.

Living and working side by side people from every culture and background made me feel a sense of purpose I’d never felt before. I realized I had a natural longing for community that I’d been trying to feed with materialism and success. My anxiety was a gift, a warning signal I couldn’t ignore telling me that I wasn’t in harmony with what I really wanted – creative expression, simplicity, and more time to be.

Soon, the emptiness began to fill.

Instead of consumption, I found connection. Instead of productivity, I relaxed into a state of presence, enjoying the moment without rushing toward the next.

It’s been several years since I made the decision to rediscover myself by getting lost in the world. Now, my worn-out backpack is in my closet. I’m home again, getting ready to buy my own home just a few miles from where I left, determined to find answers to the questions that kept me awake at night. Sometimes I wonder if there was an easier way. Did I really need to come full circle and end up where I started? Did I really have to make such a radical change to begin to experience true joy and contentment right where I am?

To be honest, I’m not really sure. I do know that my travels with Workaway were only the beginning. For me, learning to be happy living with less is a constant practice.

It’s a daily invitation to fill my life with what actually feeds my soul- slow conversations, open hearts, and an innocent sense of wonder for the world and those around me.

In that way, living with less becomes much, much more. 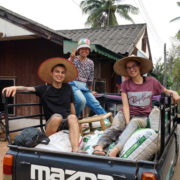 What is it like to hitchhike through Southeast Asia?? 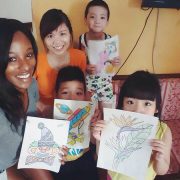 How hosting travellers can benefit your kids

Travel photography - "Martha is getting a cool cut" (Uganda) 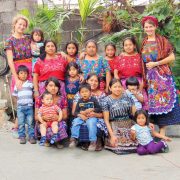 10 Easy ways you can connect with locals
5 replies

Going green on your Workaway: Permaculture living – Part One
Scroll to top